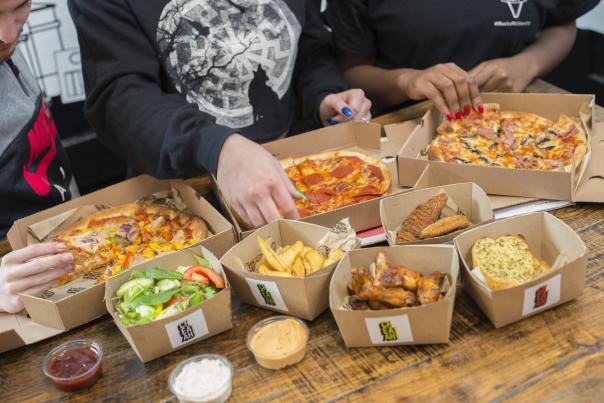 Abstract
The popularity of pizza deliveries prompted contract caterer Elior to develop its own Cheatah brand. The success of initial trials on campus has led to the concept being rolled out to other sites, reports Edward Waddell.

Armed with a tagline of ‘There’s something new on the prowl’, Elior first launched its online and on-site pizza delivery service at the University of Roehampton in south west London, following a successful trial period during the 2018 Freshers Week.

Cheatah Pizza delivers a range of fresh dough pizzas, chicken sides and desserts direct to campus halls, as well as offering a collection service near the union bar.

“We worked with chefs and nutritionists to develop a menu focusing on the bestseller combinations from the high street. “In fact, our range rivals mainstream vendors on value for money, averaging just £10 spend per head [online]. What is more, the popular service has contributed to student employment levels, proving a cost-effective endeavour all round.”

Cheatah Pizza employs several ‘dedicated’ students to deliver the food around campus. Greg Hollands, a student at the University of Roehampton, says: “I think it is a really good idea to have on campus. I think it is really accessible, there are loads of deals going on … the feedback that I have heard from my friends that have used it is that they have all said that it works really well. “It is quite nice having students deliver it on campus  as well.”

The student delivery team does more than simply transport the food; its members also help to promote the business on social media, via Twitter (@CheatahFood) and Instagram (@CheatahFood).

In January just gone, Cheatah Pizza revealed on Twitter that it had just sold its 12,000th pizza, and following the success it has enjoyed at the University of Roehampton, Elior has since launched it at three more of its sites.

The second site that was chosen was Her Majesty’s  Naval Base in Portsmouth, which has a population of around 2,500 people, and Elior holds the on-base  catering contract. At Portsmouth it was decided to change the seating arrangements in the dining area to make it ‘more communal’ and evening sales have doubled there since the introduction of Cheatah Pizza.

A third site was opened in September last year at the University of West London, based in Ealing, which has a smaller student population of around 750.

Cheetah Pizza also moved into its first business and industry site at the Croxley Park ‘green business community’ near Watford, where Elior caters for  a working population of 3,000 in offices across  the site.

Joblin says he is cautious about where to take Cheatah Pizza in the future, because he believes it needs a large on-site population in order to work properly. This is based on the in-depth work he carried out before the initial launch, carrying out extensive research to help get the project up and running.

He says: “I pretty much lived here [the University of Roehampton] … I stayed here for weeks trying to get my head around how it all works and listening to what the students were saying – and we ended up refining it  quite a lot.”

The research Joblin carried out included examining what the key players on the high street were doing, including Domino’s, Papa John’s and Pizza Hut.

“I have probably never eaten so much pizza in my life,” he says. “There is a lot to understand; the size of the market and a lot of work initially with the students here, doing focus groups to make sure we got the flavour profiling right.”

The customer research does not end there, though. Joblin conducts a survey to discover the ‘good the bad and the ugly’ at every site after launching Cheatah Pizza.

At the University of Roehampton, one month after launch, 75% students said they had a great experience and 79% would recommend Cheatah Pizza to a friend. A more recent survey found that 82% of customers  were either ‘extremely satisfied’ or ‘very satisfied’ with their overall experience.

Asked what he likes about Cheetah Pizza, student Benjamin McInnes replies: “The convenience – I work at the bar so I am always here. It is cheap … it is just simple, nice food.”

Joblin says Elior aimed to create a key destination on campus for students to eat and socialise, but believes they have ‘exceeded’ expectations.

He says the peak time for orders on campus comes during the lunchtime rush and on ‘society’ nights.

“There is a girl who runs the society nights and she loves the product,” he says. “She will come in and she might order 50 pizzas. You have seen the size of the kitchen … we can barely keep up.”

Another lesson he has learned has been that there is no need to offer too much choice. He says he cut down on the variety of pizzas available because ‘people usually ordered the same thing’. However, vegan pizza options is one area where Cheatah Pizza has expanded its offer, building on the success of its ‘Smokey Jack’.

Joblin says: “Vegan was massive here. It was like boom, boom, boom, so we introduced another one. They love it.” This helped it maintain sales last month, when lots of people took up the Veganuary challenge of going the whole month without eating meat or dairy, as did the ‘build your own pizza’ feature that is available on the Cheatah website.