Find out how firefighters are getting the nutrition they need 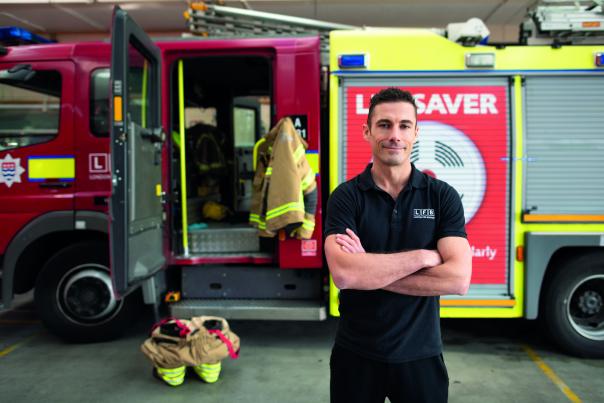 Starting his career as a London firefighter in 2001, Greg Lessons says he found that on his first night shift there was ‘quite a lot of food’.

“The portions were man-sized, and I probably started to eat a bit too much and over time began to gain a little weight, but that sparked my interest in nutrition.

“I looked at how I could improve body composition and improve my health through proper nutrition, which 14 years later turned into a deep fascination that took me back to university,” he says.

His trip back to university allowed him to pursue a Human Nutrition Masters degree, with a dissertation focused on firefighter dietary behaviour. For this he devised a dietary lifestyle intervention programme for 40 firefighters, which tried to improve the food environment from a nutritional science perspective.

After the success of the initial programme, and encouraged by a senior fire officer, he embarked on a campaign to get it expanded. In April 2018, he was given the go-ahead to turn it into a full-time PhD programme with 300 firefighters.

“We’re going to turn a very good system into a world-class system, which will then be feasible to roll out across the fire brigades.”

Firstly he focuses on group-based education, visiting a watch (a team of firefighters) and talking about his work before showing them a presentation about nutrition and health. He says this initial presentation allows him to establish links between nutrition, diet and disease and what can be done to improve risk factors for firefighters.

“It’s interactive, I encourage questions and I ask questions of them. It allows me to dispel common nutrition myths and to set the record straight.”

Following the group education, he asks each participant to fill out a dietary assessment so that he can get ‘a snapshot’ of their current diet.

“The one-to-ones allow me to give pointers on how they can adjust their diet to get them going in the right direction if I can see that things are going a bit stale. It’s not an attempt to completely overhaul their lifestyle, it’s just purely some minor adjustments to improve things.”

Lessons then carries out several follow up appointments during the year, which allow him to evaluate how his programme his working.

The results have been excellent, and this success led to him being named winner of the Caroline Walker Trust Nutritionist of the Year 2019 Award, triumphing against other nutritionists from across the country. The trust aims to promote the improvement of public health through good food.

He says that winning the award has been excellent for his work. “I was thrilled beyond belief. It was an honour to represent the Brigade and to raise the profile of nutrition, health and wellness in the workplace.”

Lessons attributes the success of the programme to the unique combination of being a firefighter, with everything that job entails, as well as the training he has received as a nutritionist.

“I know intimately the demands of the job – physical and mental - and how that interplays with food and nutrition.”

Unlike many public sector workplaces, fire stations have no canteen and food is not subsidised. The catering is all done in-house. The system works through nominated firefighters, who are made mess managers and then collect money from each firefighter, before buying and preparing food for the watch. The watch then eats together.

The focus is on meals that are energy-dense and can be re-heated easily if the meal is interrupted by a call-out.

With that in mind, Lessons, who used to a mess manager, has also devised cookery workshops. He runs the one-day workshops himself, using the opportunity to expand on the theoretical aspects of healthy cooking that he has introduced in his initial presentation.

“Rather than simply demonstrating a number of healthy meals, I focus on transferable concepts from the basis of the session content that provides a framework,” he says.

“It can be applied to a variety of meals then, rather than a bunch of meals that are cooked once in a blue moon.”

The demonstrations are accompanied by a verbal narrative, in which he explains the nutritional concept behind the meals and how it can help them.

The key is using understandable language, he says, rather than scientific jargon that could easily lose their interest.

But why is nutrition so important for firefighters?

“Firefighters work extremely busy shifts and can be called out on a shout any second. You can think of them as industrial athletes, but their role is actually more important than that of an Olympic athlete,” he says.

“Olympic athletes take nutrition very seriously and it’s time that we started thinking about firefighter nutrition in the same way.

“You need to get that perfect balance of health advice between nutrition, but also sports nutrition, and how that would apply to firefighters in terms of performance. They need to be able to perform optimally at a moment’s notice and then recover ready for the next one.”

He says that in the future he hopes the programme can be rolled out across the UK. He believes that there should be a dedicated nutritionist not only within the emergency service, but across the whole public sector.

Feedback on his efforts so far ‘has been amazing’ he says.

“My employers had the vision to provide this, and it’ll pay dividends, because it’s not just that performance within the LFBS (London Fire Brigade) has already been so much better, reducing sickness and increasing productivity but also there’s the psychological aspect. The firefighters know that their employer has their back.”