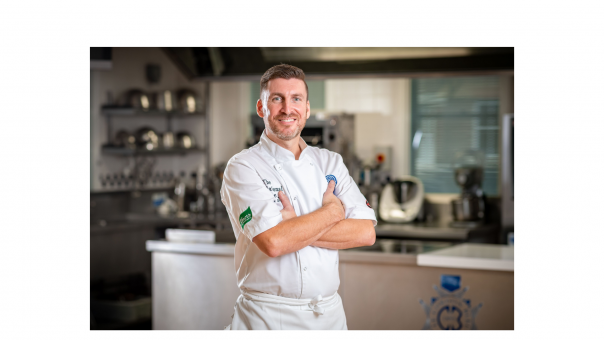 Abstract
Nick Smith was crowned the Craft Guild of Chefs National Chef of the Year 2021 last week after beating nine other chefs in a cook off at Le Cordon Bleu.

Smith said he was “committed” to giving back to the Craft Guild of Chefs. He commented: “I have watched previous winners like Kuba Winkowski [2019 NCOTY winner] who has really inspired me and I watched him use winning in an incredible way. For me it’s up to you how you use it. I don’t think it’s a competition where you just sit back and wait for things to come, I think you have been given that opportunity and been given the key to that door but it’s up to you to get out there and make the most of it, which I am going to do.

“I said if I was ever to win it I would love to open my own restaurant or something like that. I would just love to show off what I can do and enjoy every single part of it. I said to David [Mulcahy] and Paul [Ainsworth] yesterday I am wholly committed to putting back into the Craft Guild because of what I have got out of it. I am so committed to doing that because I have learnt from doing this competition that it’s not just a competition you win but leaving a legacy.

“We get a lot of students that come to Ashurst and we have invested a lot of time into them, they spend four weeks with us. Inspiring them, like I have been inspired. I want to get involved in everything to be honest, I hope I get opportunities and if they come I’m going to take them and do as much as I can.”

When asked how did it feel to be the NCOTY 2021, Smith replied: “It’s really hard to put it down to words, it’s such an amazing feeling. I’ve committed so much time to it and I didn’t think I would ever do it. I was so overwhelmed to be honest, I didn’t want to go to sleep as I was worried I was going to wake up and it was all a dream. I am absolutely thrilled and over the moon.”

Smith entered the National Chef of the Year competition five times and it was third time lucky in the final as he claimed the crown. Arguably the NCOTY competition this year was the hardest it’s ever been due to the restrictions caused by the Covid-19 pandemic.

Smith said: “Usually when I was in the kitchen I had a lot people around me like my brigade to bounce things off with them but we didn’t really have that interaction or it would be over the phone. In that respect that’s where it had its challenges and you know doing things at home is different to doing things in the kitchen so I had to adapt to that.

“When I found out that I got into the final, there was challenges there as we weren’t allowed a commis chef. Being as tough as National Chef of the Year is not having that secondary person in there to keep you on track that added a massive difference to it.

“When I came to do my practice I needed to be even slicker than I was before because I was in control of everything: watching my timers, what stage I was at and I didn’t have someone to say to me ‘watch your pan’. Luckily I was able to use the kitchen at Ashurst which put a massive difference to the whole aspect on it.”

The NCOTY judges praised Smith who researched and sourced his ingredients locally from Essex. Smith added: “This year being at home because of Covid-19 I got into what was around me. Even with our menus we do think about provenance which has a massive part to do with cookery now. I just really wanted to focus on ingredients and there is a ‘pick your own’ farm not far from me, just on the boarder of Essex.

“They do these fantastic strawberries called Sweet Eve strawberries so I went along there to research them. I really went out and sourced everything that was around me and I just wanted to put that extra effort in to make it a little bit different.”

Smith also sourced berries from Cammas Hall, honey from 10 minutes down the road from his house and he found a dairy in Wickford where they produce their own cheeses and creams. For his lamb he did venture into Kent where he bought a “beautiful saddle of Romney Marsh lamb and it was just absolutely stunning.”

“Each time I did it I got my feedback to make me come back a little bit stronger. Keep practising and don’t give up. Now I am just so glad that I kept persevering.  Surround yourselves with great people. I have been lucky, I have a fantastic sous chef and brigade.

“I haven’t done this on my own. I have had them with me through thick and thin and my wife has been absolutely amazing, my family have been amazing. They know how much love I have for my job and how much it meant to me. Having those people around me they are the ones who helped me get through it.”