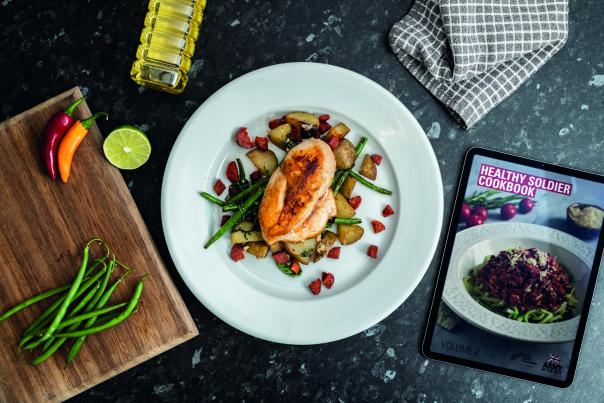 Abstract
The Army has launched a new Army EATS digital hub that it hopes will enable soldiers to have more input into how food and catering services are modernised in the future.

The Army EATS hub, which is hosted on the Army’s enterprise social network Defence Connect, was launched during the British Nutrition Foundation’s Healthy Eating Week (June 14-18) to encourage a dialogue with soldiers about food, nutrition and health.

The aim of the hub is to ‘support a communication forum for soldiers to increase their nutritional knowledge as well as allowing them to contribute to discussions about how the modern soldier wants their food services provided’.

The theme for Healthy Eating Week was ‘Find Your Healthier You’ and the Army believes its new hub embraces this aspiration fully by providing a wealth of information, interactive resources and online activities throughout the week and going forward.

Staff Sergeant Guy Lowe-Barrow, a chef instructor with 167 Catering Support Regiment RLC based in Grantham, said: “Our meal choices over time influence our fitness and wellbeing; they can help optimise performance and maintain our mental health or have the opposite effect.

“As an Army chef it can be challenging being able to provide nutritious meals, such as on exercise or operation where the core stables of the British diet may not be as readily available so it’s about how you innovate to create dishes that look and taste good and meet the needs of the environment.

“As a chef it means that I’m constantly looking at different ways to ensure that meals are vibrant and a mixture of modern with some old favourites as well, but being able to help shape the future of my trade and give the troops a choice that meets their dietary needs and lifestyle is very rewarding.”

What is Army EATS?

The digital hub is part of the wider Army EATS (Exploring the Appetite of Today’s Soldiers) programme, which was launched in January this year and looks at how catering and messing services are delivered for the whole of the Army.

The Army EATS ethos is about soldiers being supported in making healthier and more informed choices and works alongside industry partners Aramark, ESS and Sodexo.

Colonel Jason Phillips, who is part of the team heading up the Army EATS programme, commented: “As times change, we need to invest and evolve our offer to ensure inclusivity to all generations who access and consume its services. Army EATS Messing is our pledge to deliver a dining and social experience that is relevant, nutritious and supportive of modern lifestyles.”

Army EATS has made great progress as a relatively new initiative, spurred on by the appointment of the Army Messing Advocate, Major General David Eastman, whose remit is to consider nutrition, cooking in single living accommodation and infrastructure.

One of the first tasks was to conduct an Army-wide survey which had over 9,000 responses from troops on what they want to see in the future.

Building on the survey, messing trials will take place in six sites across the UK in the Autumn. The survey and trials will inform the contract requirement for the next round of dining services contracts.

Further transformational changes are also taking place including, the provision of over 2,290 kitchenette and prep-rooms across the single living accommodation estate and the upgrading of 26 establishments within the Project Allenby/Connaught (PAC) regions.

PAC is a 35-year commitment to provide modern, high quality, fully serviced, purpose-built living and working accommodation for thousands of soldiers across Aldershot and Salisbury Plain.

With the success of the Healthy Soldier Cookbook in 2020, the Army knows that even the smallest change can bring great results. Army EATS aims to collaborate, innovate and invest; with the influence of today’s soldiers it will ensure a legacy of improved experience for tomorrow’s Army.