Meet the dinner ladies who became unsung heroes during lockdown 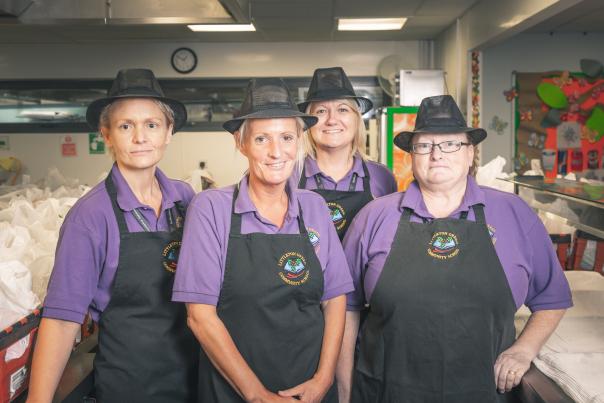 Abstract
When the UK went into lockdown many schools shut their doors but some remained open for vulnerable and key worker children to receive a skeleton babysitting service and lunch. Not all superheroes wear capes, some dress in pinnies and caps.

CMC School Food help schools and colleges to deliver over five million school meals every year. The catering consultancy visited six of their client schools who had gone ‘above and beyond’ the expectations during lockdown. Photographer Paul Husband was recruited to help document their success stories.

With some 8 million children attending school and 15% of these in receipt of free school meals, school catering staff play a vital role in ensuring the health of our future generations.

The modern dinner lady is trained in food safety with menus and meals planned and prepared according to the School Food Standards. School catering teams comply daily with regulations to prevent food contamination, so the additional measures imposed following coronavirus were nothing new.

Parents were asked to notify the school of anyone in the community that needed additional support. Soon after the food bank was born operating out of a classroom in the school.

Lynn said: “It has been very much a team effort. The staff are continuing to deliver and open up through the summer holidays. Create church have worked tirelessly with the supermarkets to get the best deals they can. At our highest point we were delivering 95 meals and we have never gone below 40 meals."

At the start of Covid 19 the catering team provided lunch at their own school as well as to a neighbouring school (St Paul’s) because their catering staff had to self-isolate. The dinner ladies continued to support St Paul’s for over the next ten weeks.

Catering manager Marie Shrimpton and her team decided to stop making hot meals and serve sandwiches instead. Even Marie’s husband, who was on furlough, was bought in as ‘Mr Fix It’ to help repair broken tiles on the kitchen walls.

The catering team also created a kitchen garden to help supply the kitchen with fresh produce and herbs.

Catering manager Terry Heap and her staff baked cakes to send out in food parcels that were distributed to the local community. As a result of schools closing it made thousands of more children vulnerable to holiday hunger as they would have usually received a nutritious meal at school.

Terry said: “The response we had was lovely. To know that people were appreciative of the little bit we could do was everything to me.”

Once a week Terry did baking activities with key worker children in the school. Everything was kept separate so the children handled their own food and at the end of the day they could take what they made home with them.

The catering team had a ‘keep calm and carry on’ approach as they provided 70 hot lunches to key worker children and school staff.

Kim Hall-Wood, catering manager, felt it was important to provide children with a hot meal as it could have been the only hot meal they eat that day.