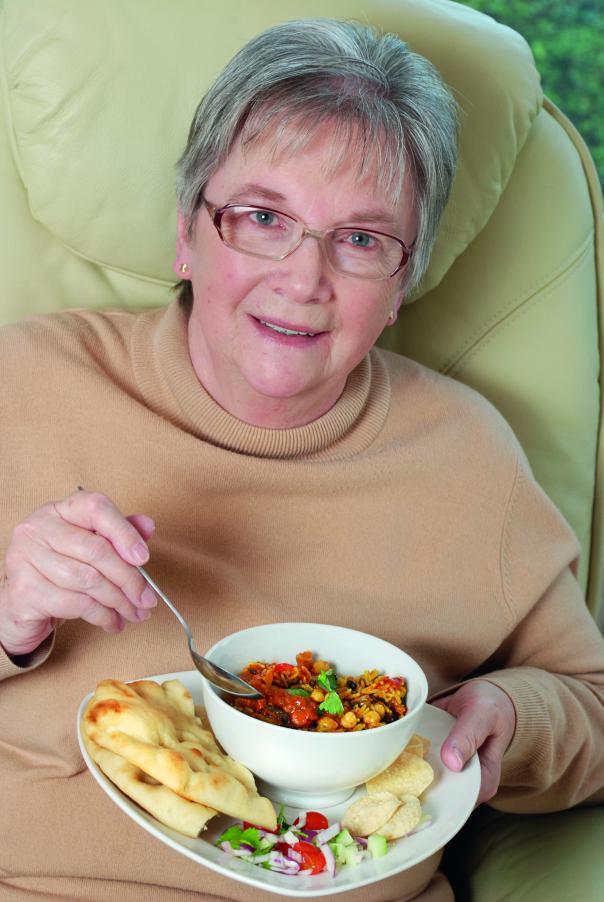 Abstract
This Dementia Action Week (16-22 May) the organisation Vegetarian for Life is encouraging carers to consider how they support people with their beliefs, writes Joe Barson head of research and policy for VfL.

What happens to our values and beliefs if we get dementia? If we don’t have the ability to communicate our thoughts, how do we maintain this part of our identity?

And what part can care caterers play to support people in maintaining their beliefs and lifestyle choices?

This year, Dementia Awareness Week coincides with National Vegetarian Week and at Vegetarian for Life (VfL), the charity supporting older vegans and vegetarians, we believe this is the perfect moment to reflect on how to support those with dementia to retain their values.

As dementia advances, people may become less able to communicate their thoughts. Living in care, they may not have reminders about the ethical values that guided their lives. In such cases, there is a concern that people will make choices that go against their beliefs. This concern is demonstrated by a recent Inquiry Report published by the All-Party Parliamentary Group on Vegetarianism and Veganism.

The report illustrated cases of people with dementia, who had been vegan or vegetarian for decades, being fed meat. In some cases, they appeared to select animal-based foods. In others, they could not express their preferences.

This is a worry to those who follow ethical or religious diets. These diets are central to a person’s identity: a way that they perform their values daily. If they reach a point where they lack the capacity to make ethical choices, they risk undermining the values that have characterised their lives.

This concern for the beliefs of those in care settings goes beyond just respecting a person’s past wishes.

Recent research into dementia has considered the ideas of identity and personhood. Simply because a person struggles with memory does not mean that their values, and the right to hold those values, have disappeared.

Research begins to suggest that even when the condition is advanced, people should be supported to interact with ideas that are important to them.

This may help them retain a sense of identity in a care setting, especially when communicating with carers. In such cases, the carer actually supports the person to retain a sense of themselves, even as their condition progresses.

Practically, the question remains as to how those catering for individuals in care settings will be aware of the beliefs of those with dementia. In some cases, people will have families who are able to explain the beliefs that may have guided a person’s life. However, VfL strongly recommends that people document their future wishes.

In Northern Ireland, for example, there is currently a consultation going on into Advanced Care Planning. The idea is to allow people to document what matters to them to guide their care.

The current draft policy includes sections on spirituality and recognising the importance of documented beliefs. The Mental Welfare Commission in Scotland similarly publishes a blank personal statement for those who may experience capacity issues or cognitive losses, though the statement does not carry legal weight.

Elsewhere, in its Self-Advocacy Guide, VfL provides a template Statement of Wishes, allowing people to document their dietary beliefs. This statement includes sample wording, clearly explaining to carers how to support people on meat-free diets if they appear to be choosing meat-based dishes.

These statements may be completed prior to receiving care, or when the person enters a care setting. Scottish guidance to care providers makes clear that care plans should be completed when people enter care settings.

These should document how a person wants to live and what to do if they experience issues with capacity or cognition. Such tools enable people to communicate and document what matters to them. They should alert care caterers to the values of those receiving care and ensure that beliefs are respected.

However, when values are documented, it is important that care providers reference these views and act accordingly. To support providers, VfL has produced a Memory Care Pledge, encouraging people to investigate and acknowledge individuals’ dietary beliefs.

The pledge consists of five simple good practice points that care establishments can follow to ensure that vegetarian and vegan residents experiencing capacity issues or cognitive losses will be offered a choice of meals, drinks and snacks that uphold their ethical beliefs.

Good practice recommendations include offering a resident the opportunity to eat at a vegetarian-only, or vegan-only table when possible, and in the event of an ‘accidental’ choice to eat meat, offering an alternative that upholds their philosophical beliefs.

These recommendations are suggested because at Vegetarian for Life we are aware of vegetarian residents who experience issues with capacity or cognition, and as a result may otherwise pick meat from others’ plates.

Beliefs are central to our identity and personhood. Dementia Action Week should be a time to focus on how providers can best support those with limited capacity to maintain beliefs and values that define them as people.