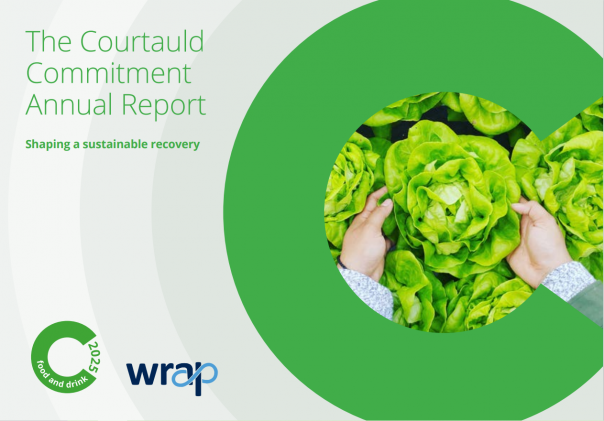 Abstract
With only four months until COP26, which takes place in Glasgow in November, the UK has taken a bold step forward in reducing the impact food has on the natural world with a number of ambitious changes to its ground-breaking Courtauld Commitment voluntary agreement.

The commitment is already helping the UK food and drink sector to deliver against the UN’s Sustainable Development Goal (SDG) 12.3 to halve food waste. It will now also be central in achieving and monitoring progress towards Net Zero ambitions and convening action on water stewardship in at-risk food sourcing locations.

“But with COP26 fast approaching, the new Courtauld Commitment 2030 has been refreshed to build on this success and meet newer demands of climate action head on.

“Climate change is the biggest threat we all face, and fixing food is vital. I believe Courtauld has never been more important as only fundamental change can reset our fragile global food system into a sustainable model that will feed us in the future, and cut greenhouse gas emissions towards Net Zero.”

Foremost among the firmer commitments is the first industry-wide collaborative action towards a 50% absolute reduction in greenhouse gas emissions associated with food and drink consumed in the UK by 2030 – regarded as a critical milestone towards longer term net zero objectives.

There is also a pioneering focus on measuring carbon along the entire food chain and acting on the results is being driven by environmental charity WRAP. The charity delivers the Courtauld Commitment, and brought together more than 80 businesses, trade bodies, NGOs, government departments and other organisations to set the inspiring new GHG targets through the practical framework of the Courtauld Commitment.

The now aligns seamlessly with the wider global target on food waste reduction under the UN’s SDG 12.3. To reflect this synergy more clearly, a new moniker for the world’s most ambitious voluntary agreement for sustainable food means it becomes the ‘Courtauld Commitment 2030’.

The Courtauld Commitment 2025 launched in 2015 and was then a ten-year programme, to complete in 2025. Today, the agreement has strong membership with more than 90% of UK food retail as well as food manufacturers, the hospitality & food service sector, farmers & growers, redistributors and charities, trade bodies, local authorities and groups and businesses from across the lifecycle of food.

The core Courtauld Commitment targets have been recast to reflect the extension and expansion of the agreement, as follows:

•    A 50% absolute reduction in GHG emissions associated with food and drink consumed in the UK by 2030, against a 2015 baseline.
•    A 50% per capita reduction in food waste by 2030 vs the UK 2007 baseline.
•    To achieve sustainable water management (quality and quantity) in the top 20 most important product and ingredient sourcing areas in the UK and overseas – covering 50% of product ingredients deemed ‘at risk’ from water insecurity.
•    Extending the Courtauld food waste prevention target to 2030, and aligning it with the global target to halve food waste, will mean that UK food waste will be 800,000 tonnes lower in 2030 compared to 2025, saving food worth £2.4bn a year by 2030 and the equivalent of 1.9 bn meals
•    Between 2025 and 2030 the extended and more ambitious food waste target will result in 2.6m tonnes of food waste being avoided over the five-year period; saving £8 bn of food from being wasted, and the equivalent of 6.2 bn meals

Environment Minister Rebecca Pow, Defra said: “Our food and drink industry has a hugely important role to play in addressing the urgent challenges of climate change and sustainability.

“The UK is a world leader in combating food waste, which fell by 480,000 tonnes between 2015 and 2018. But we must go further; not only by stopping more food being chucked away needlessly, but also by slashing the resources consumed by the sector, to help us achieve Net Zero.

“The Courtauld agreement has been a great success in bringing organisations together to create a more sustainable industry, and these new, far-reaching goals for 2030 will take this to the next level as we head into COP26.”

Government Food Waste Champion, Ben Elliot, added: “From farm to fork, our food and drink sector is hugely reliant on natural resources, which means it also has a significant environmental footprint.

“Not only do we need to drastically reduce our food waste both before and after it has been plated up, but we also need to reduce the reliance on those resources from the outset to better protect the planet.

“The Courtauld agreement is central to achieving this vision. I strongly encourage food and drink businesses to get behind these ambitious targets for 2030 to reaffirm the sector’s commitment to creating a greener and more sustainable food system.”