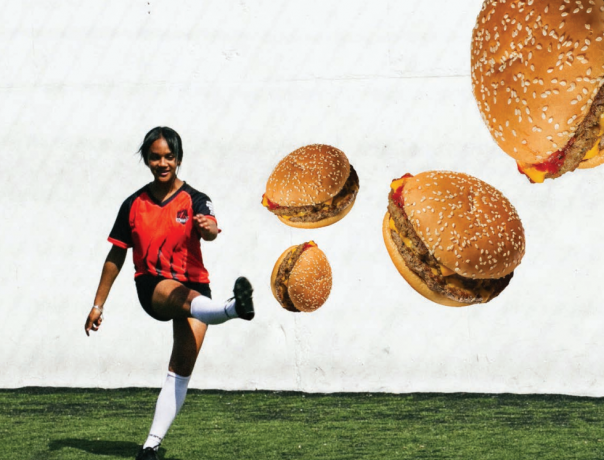 Abstract
A new report by the Children’s Food Campaign and Food Active has found the power of UK sport to influence healthier lifestyles is being undermined by a ‘constant barrage’ of unhealthy food and drink sponsorship deals and advertising.

The report titled ‘Kicking Out Junk Food’ documents how 2021’s ‘Summer of Sport’ was used by the food and drink industry to flood families with marketing, advertising and sports personality-led promotions for pizzas, burgers, chocolate crisps and fizzy drinks.

Sports stars are starting to agree with health campaigners and parents on the health of these partnerships after footballer Cristiano Ronaldo removed two Coke bottles during a UEFA EURO 2020 press conference, urging fans to drink water instead.

One of the parents involved in the research said: “It was encouraging to see Ronaldo remove Coca-Cola bottles at a press conference and say 'drink water' and I hope that more sportsmen and women will use their platforms to take a stand in this way.”

The report is calling on the Government and the sports industry to take action and kick junk food advertising out of sport. This can be achieved by:

Barbara Crowther, co-ordinator of the Children’s Food Campaign, commented: “Children should be free to play or watch sport without being deluged with advertising for crisps, chocolate, pizzas and burgers.

“Parents feel very strongly that their children get very mixed messages, and it’s shocking to see the scale and range of tactics being played by the junk food industry in ‘sportswashing’ unhealthy food and drink.

“It’s clear that voluntary agreements with the food and drink industry about responsible partnerships with sport are utterly failing, and perhaps it’s time for the Government to step onto the field and show junk food advertising in sport the red card.”

Sustain believes this is ‘particularly concerning’ given the recent National Child Measurement Programme results, which indicated a ‘significant increase’ in levels of obesity in primary schoolchildren.

Report co-author Beth Bradshaw from Food Active, added: “Parents are acutely aware of the impact that these marketing tactics are having on children’s food preferences and brand awareness, and the difficulties they present especially in light of the difficulties some already face in feeding their child/ren well.

“What was clear from the parents we spoke to is they are sympathetic to the need for funding sport and physical activity at grassroots and junior levels but believe that current dependency on less healthy food and drink advertising for these revenues is unacceptable – and we wholeheartedly agree.”