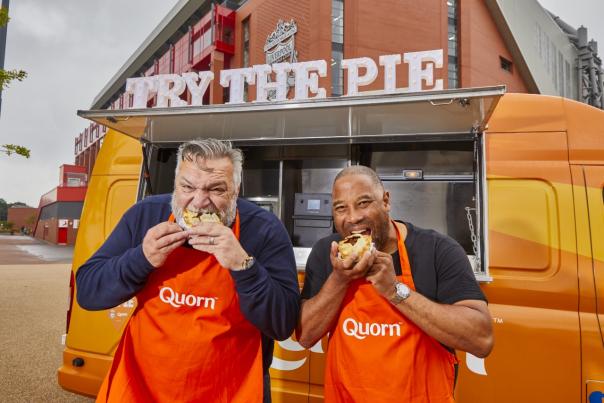 John Barnes and Neil ‘Razor Ruddock’ helped to launch the new Quorn meat-free steak match day pie onto the match day menu at Anfield and they will be serving it to fans at Liverpool’s home game against Burnley on Saturday 21 August 2021.

Current Liverpool FC players Thiago Alcantara, Andy Robertson and Curtis Jones were also put to the test by Quorn, to see if they could uncover the new addition to the Anfield menu. The trio sampled Anfield’s steak pie and Quorn’s meat-free match day pie and it was the meat free version which came out on top.

Gill Riley, marketing director at Quorn Food, said: “If football fans at Anfield swapped to a Quorn meat-free steak match day pie for just one home game, we can save 102,600 kgCO₂e, which is the equivalent to the energy needed for 733 matches worth of floodlights in Anfield.

“As you can see by our rigorous taste testing with Liverpool FC legends John and Neil, choosing Quorn is a delicious swap we can all make. Not only are our Quorn pies super tasty, they are a smart sustainable option. By making better food choices available on match day menus, we can all make a real difference.”

The launch comes as new research revealed nearly half of football fans (45%) have experimented with non-meat or a flexitarian diet and 78% said they would change their diet to help the planet.

Barnes added: “Making better food choices for the environment is a team effort, and given how tasty these Quorn pies are, this is one ‘Super Sub’ that I think our Liverpool FC supporters are going to enjoy seeing at Anfield!”