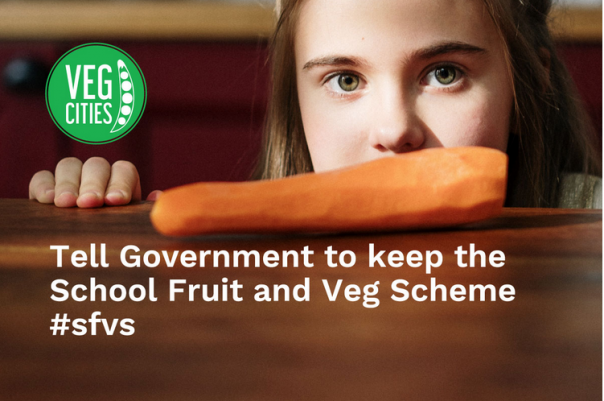 Abstract
Veg Cities, a campaign organised by Sustain, is urging people to lobby Government to bring back the School Fruit and Vegetable Scheme, which offers 2.3m children aged 4 to 6 at state-funded primary schools in England a free piece of fruit or vegetable each school day.

The scheme was suspended in March and despite the fact that many Reception and Year 1 children have been back in school since June, the scheme has not been reinstated.

Veg Cities, which works with Sustain’s wider Peas Please initiative to encourage greater consumption of fruit and vegetables, has produced a template letter backing reinstatement of the scheme.

The letter says: “This is an injustice to children, parents and farmers alike. Ninety percent of children are missing their five-a-day and consumption has lowered even further during lockdown, especially among children from poorer backgrounds.

“At the same time, there is surplus fruit and veg destined for the hospitality industry.”

The letter template points out: “A recent study from Northumbria University found that around half of the children eligible for free school meal vouchers have experienced a significant drop in their intake of fruit and vegetables since schools closed in March.

“Almost half reported having eaten no fruit in the same period, yet many reported a large increase in consumption of sugary drinks and snacks. The suspension of the School Fruit and Vegetable Scheme threatens to compound this decline. At the same time, there is surplus fruit and veg destined for the hospitality industry available.

“The scheme is valued by children, parents, schools and producers. Given the low levels of fruit and vegetable consumption among children, and the Government’s commitment to halve rates of child obesity by 2030 as stated in the second chapter of the Childhood Obesity Plan, I ask that the Government commits to extending the School Fruit and Vegetable Scheme to all primary school children when the contract next comes for renewal.”