Meet the Top 20 ‘Most Influential’ in public sector catering 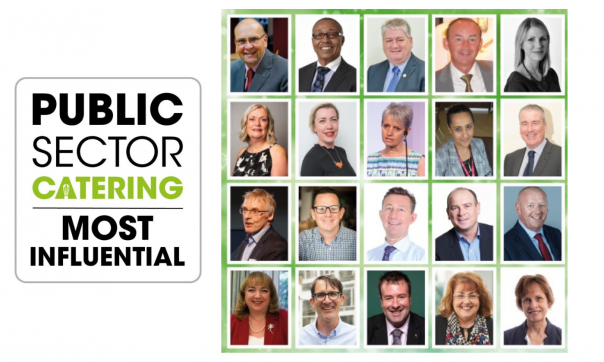 Abstract
Public Sector Catering has once again convened a panel of expert judges to draw up the top 20 ‘most influential’ people in public sector catering.

David Foad, editor of PSC magazine says of the 2021 intake: “Who are the people who are really shaping and driving the agenda in schools, hospitals, social care, universities, prisons and the military?

“It’s a question we’ve been asking since we convened a independent panel of judges to draw up the first Top 20 ‘most influential’ people in public sector catering in 2008. We’re still following the same formula and here is this year’s list - the order in which they appear is purely random and does not imply any sort of ranking.”

Simon is executive director of Eating Better, an alliance of over 60 civil society organisations. Eating Better is accelerating action to reduce meat and dairy consumption for health, environment, animal welfare and social justice.

After a two years shadowing Stephen Forster as vice chair of LACA, Jacquie Blake stepped up to become chair of the school food organisation in September. LACA represent 300 local authorities and together provide 80% of school catering, providing more than 3m meals a day in 27,000 schools served by 110,000 staff.

Now in her second spell as chair of the National Association of Care Catering (NACC), the organisation for care home caterers and community meal providers, Sue has worked within the elderly sector for over 25 years, including hands on support and care, business management and strategic planning, marketing and fund raising.

Although semi-retired, Lindsay is poverty and inequality commissioner in Scotland, and a former independent government policy adviser specialising in food and public health.

Has been chairman of Sodexo UK & Ireland for four and half years, heading a business that operates catering contracts in NHS hospitals, schools, universities and on British military bases.

The Labour MP for Washington and Sunderland West has made no secret of her interest in children and families during her 16-year parliamentary career, and has a particular concern about feeding children well at school.

As chair of the PSC100 Group, Andy lobbies on behalf of the public sector catering industry to share information and ideas across the different parts of the sector.

She is chair of the Association of Service Solutions in Scotland (ASSIST FM), which represents all local authority school meal and community service providers in the country, highlighting best value and information on practices, products and services.

Professor Susan Jebb, the new chair of the Food Standards Agency (FSA), is one of the country’s leading scientists, a Fellow of the Academy of Medical Sciences and Honorary Fellow of the Royal College of Physicians.

The long-serving Bidfood group sales and marketing director is the consummate industry networker with all the important contacts in his book.

The managing director of Compass Group UK & Ireland for the last two years, Robin previously headed the group’s Chartwells education division, and has made it a point that the business puts ‘doing some good’ at the core of its decisions.

The special adviser for hospitality and foodservice with the charity WRAP (Waste Resources Action Programme), which works across six continents with organisations, businesses and citizens to promote the sustainable use of resources.

Paul is chief executive of the not-for-profit Association for Public Service Excellence (APSE), which is based in Manchester and has 250 local authorities in membership.

The head of catering at Her Majesty’s Prison and Probation Service (HMPS), he is responsible for feeding 80,000 prisoners a day on an average budget of £2.15 for three meals a day.

Executive Director of Nourish Scotland, which along with the Scottish Food Coalition, has been campaigning for the new Good Food Nation Bill that aims to provide a framework for the Scottish food system.

Chair of the Hospital Caterers Association (HCA), took over from Craig Smith in April 2021, and has put in place a re-forming and modernising strategy to make the organisation ‘fit for the future’.

The deputy president of the National Farmers Union (NFU), is a Hertfordshire farmer who has also worked for Defra and the Food Standards Agency and held senior management roles within the meat supply chain.

As chair of the Professional Association for Catering Education (PACE), Molly sees her role as encouraging catering educating institutions to work together to manage the challenges of continuing change.

Currently senior operational & policy manager, NHS Estates and Facilities, he chaired the Independent Review of NHS Hospital Food, which was published in autumn 2020, and is leading the effort to embed the recommendations through the formation of an NHS Chef competition, a chef academy and spreading the word about excellence from among Trusts that have already embraced the review. A former chair of the HCA.